With Memorial Day earlier this week in the United States, and the hearts and prayers of many Americans turned towards the soldiers and families who have given so much – even their lives – I can’t help but be reminded of the cost of peace.

And it’s in this spirit that I’m writing to you today with our Middle East Update.

Amidst the violence unleashed this month along Israel’s southern border, and the threats issued by terror groups like Hamas and the Palestinian Islamic Jihad, sometimes the potential for peace appears impossible. 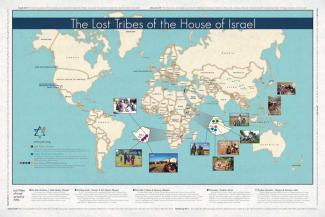 Get the “Lost Tribes” Map

Enjoy a fascinating and eye-opening reference guide to the miraculous rediscovery of Israel’s “Lost Tribes” and Jewish Voice’s efforts to reach and bless them—updated with the latest research and insights. (Makes a wonderful prayer reminder!)

President Trump’s “Deal of the Century”

Chances are, you’ve heard rumblings of President Trump’s “Deal of the Century.” It’s been a long-awaited peace plan for the Middle East. And late last week the Trump administration announced the details would be presented to leaders on June 25-26 at a conference in Manama, Bahrain.

Already speculation is growing concerning the details of the President’s plan. And while the Trump administration has said the plan will require compromises from both Israel and Palestine, it’s unclear whether or not a two-state solution will be part of the proposal.

Israeli officials have yet to issue a response – or speculation – about the peace plan and its unveiling.

The Palestinian Social Development Minister, Ahmed Majdalani (who is also an executive member of the Palestine Liberation Organization), has already stated that Palestinian officials would not attend the June meetings.

“Any Palestinian who would take part,” Majdalani said, “would be nothing but a collaborator for the Americans and Israel.”

You may recall, the Palestinians severed ties with the United States more than a year ago. And they have repeatedly expressed fears that the White House would try to buy their agreement for anything less than the demand they’ve made for an independent state.

The unwavering core demands from the Palestinian leadership is a two-state deal with full control of the occupied West Bank and Hamas-ruled Gaza, as well as occupied East Jerusalem – territories captured by Israel in the 1967 war.

How You Can Support Israel and the Jewish People

As we move closer towards the Middle East peace plan unveiling in June, it’s critical that we join together and pray for:

Finding an effective solution, and the potential for peace, within this hotbed of controversy and hostility will only be possible through a significant move of the Holy Spirit.

So please join me and Jewish Voice as we stand with Israel and pray for peace.

Your gift will go towards:

Will you join us in interceding for the Enewari Outreach?
Who is Jewish Voice Ministries?
Praises and prayer requests from the Poland festival
Is Trump’s peace plan good for Israel?
No child should ever have to make this choice