Israel finally has a new government. Now what?

“I have told you these things, so that in me you may have peace. In this world you will have trouble. But take heart! I have overcome the world.”

It’s been more than two months in isolation for most of us across America and in other countries as well. Let me encourage you with the words of Jesus from John 16:33 above.

We live in a fallen world which means we will have trouble. But we can take heart because our Messiah has overcome the world. That means we are overcomers in Him regardless of what life – and this pandemic – throw at us. Because of Jesus, we can have peace even in these difficult times.

And let us continue to pray for peace for our world and especially for Israel. Finally, on Sunday, Israel’s new government was sworn in, ending a 508-day political deadlock. Now the headlines have turned to a handful of issues that highlight the need for peace and for our prayers – from the West Bank annexation to the International Criminal Court case. Please read the stories below so you can know how best to pray specifically. Thank you.

After the 35th government was sworn in on Sunday, Prime Minister Benjamin Netanyahu told the new ministers at the cabinet’s first meeting that the pandemic tops the government’s agenda.

The second mission, Netanyahu said, is to pass a state budget and revive the economy, which he acknowledged may take considerable time to be restored to its pre-coronavirus state.

His third priority is to combat Iran.

The fourth is fighting the war crimes probe in the International Criminal Court (read more about this in an article below).

The West Bank annexation is the fifth priority. Netanyahu said, “I don’t hide my intention to bring it quickly to the cabinet.”

Concerning West Bank land, he said, “These regions are the cradle of the Jewish people. It is time to extend Israel’s law over them. This step won’t bring us further away from peace, it will get us closer. The truth is, and everyone knows it, that the hundreds of thousands of settlers in Judea and Samaria will always stay put in any future deal.”

U.K. AND U.S. HAVE DIFFERING VIEWS ON WEST BANK ANNEXATION

With Israel’s new government in place, political upheaval could be renewed concerning Netanyahu’s proposed annexation of dozens of Jewish settlements built in the West Bank.

The U.K. has stated they will not support Israeli annexation of West Bank territory, believing the move could upend regional peace accords and make a sustainable two-state solution harder to achieve. European Union foreign ministers said last week they will meet to discuss possible sanctions against Israel as a response to annexation steps.

In contrast, U.S. President Donald Trump’s Middle East plan, released in January, endorsed Israeli sovereignty on 30% of the West Bank. This was a departure from long-standing U.S. policy.

Trump’s plan relies on Netanyahu’s pledge to him that the prime minister would negotiate with the Palestinians on the basis of the plan and commit to the “status quo” in parts of the West Bank where Palestinians would govern themselves under a future agreement, according to The Washington Post.

Netanyahu has said cabinet discussions concerning the extension of Israeli sovereignty to Jewish settlements in the West Bank will start in July. 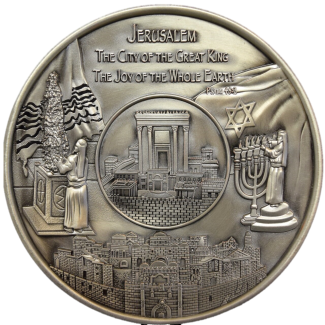 When you give a gift of $45 or more to provide support for Messianic ministries in Israel and critical resources to Jewish people around the world, we’d like to bless you by sending our Pewter Temple Plate. This beautiful plate is a work of art. It will serve as a pictorial reminder to pray for the peace of Jerusalem and for the peace of Yeshua our atonement to dwell in the hearts of all Israel. Request your Pewter Temple Plate today!

Late last week, U.S. Secretary of State Mike Pompeo released a statement calling the International Criminal Court (ICC) a political body, not a judicial institution. Pompeo stated the case against Israel at the ICC is an illegitimate prosecution.

Netanyahu has deemed this possible war crimes investigation by the ICC a rare “strategic threat” to Israel and made efforts to prevent it one of the new government’s top priorities, according to The Times of Israel.

On April 30, ICC Chief Prosecutor Fatou Bensouda asserted that Palestine is a state for the purposes of transferring criminal jurisdiction over its territory to The Hague. Her assertion could pave the way for a war crimes investigation against Israel’s military and civilian leadership, but also against Palestinian terrorists. It is now up to a pre-trial chamber to rule on the matter, which it is expected to do in the coming weeks.

“A court that attempts to exercise its power outside its jurisdiction is a political tool that makes a mockery of the law and due process,” said Pompeo in his statement. “The United States reiterates its long-standing objection to any illegitimate ICC investigations. If the ICC continues down its current course, we will exact consequences.”

Earlier last week, a large, bipartisan group of 69 U.S. senators and 262 U.S. House representatives sent a letter to Pompeo, urging him to call on the ICC to halt its investigation regarding the U.S. and Israel, saying it was politically motivated, according to The Jerusalem Post.

And the members of Congress noted what many others already have, that the Palestinian Authority is not a state, and therefore “does not meet the criteria to qualify” to bring allegations against another country.

LET US PRAY TOGETHER

Join me in thanking God that He is our source of peace, who has overcome this world and all of its trouble. Please pray with me for:

Reflecting on Shavuot
Shavuot/Pentecost, Night of Promise and Israel news
Celebrating the gifts of God’s Word & His Holy Spirit given at Shavuot
The Anticipation of Shavuot
This is an urgent call to prayer