Looking to the past, Monday was International Holocaust Remembrance Day. This is a day set aside to remember the six million Jewish people and millions of others who perished at the hands of the Nazis in World War II. It is held on January 27 because that is the day, in 1945, the vile Auschwitz-Birkenau concentration camp was liberated.

This year marks the 75th anniversary of that event – literally a lifetime has passed since those dark days. But I think you’ll agree that 75 years is still too short a time to forget this tragedy. Unfortunately, that is just what is happening among younger generations. I’ll talk about what we can do about that in a moment.

Looking to the future, on Tuesday, President Trump unveiled his “Deal of the Century” plan for Middle East peace. The proposal faces an uphill battle, but this one does have a few unique features from past attempts that might make a difference, including a level of detail never seen before in a plan.

WHAT MAKES A “DEAL OF THE CENTURY”?

If the President’s peace plan were to be accepted by both sides right now, here are some of the major impacts:

The last point is where past peace plans fell apart. However, in the past, the plans were also vague about what Palestinians could expect in the deal. President Trump’s plan is very specific, including a detailed map of the potential new Israeli-Palestinian borders.

The plan is also good for Israel because, unlike past plans, it recognizes the reality of Israel’s sovereignty and need for security. In his speech, Prime Minister Benjamin Netanyahu made this point.

“For too long, the heart of Israel has been outrageously branded as illegally occupied territory,” he said. “Today, Mr. President, you are puncturing this big lie. You are recognizing Israel’s sovereignty over all Jewish communities in Judea and Samaria – large and small alike." 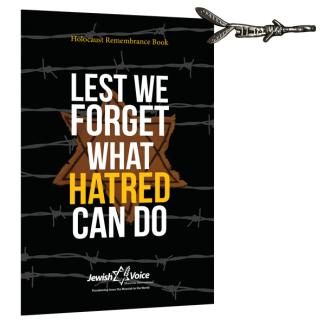 Stand with Israel and the Jewish people!

When you give a gift of $20 or more to provide support for Messianic ministries in Israel and critical resources to Jewish people around the world, we’d like to bless you by sending you our Lest We Forget package. You’ll receive a commemorative book filled with stories of Holocaust survivors and a special Holocaust Remembrance Lapel Pin. Request this package to show both your support of Israel and the Jewish people and that we will never forget.

NEXT STEPS IN THE PEACE PROCESS

Both Israeli Prime Minister Benjamin Netanyahu and Prime Minister candidate Benny Gantz of the Blue and White party are on board with the plan. Also, unlike proposals in the past, several Muslim nations, including Egypt, Saudi Arabia, Bahrain, and the United Arab Emirates, have offered support for the plan.

One surprising source of opposition is coming from Israeli Arabs whose villages and cities would be moved to the Palestinian state’s territory. They say they want to remain citizens of Israel no matter what. That’s not the attitude usually painted by the media of Arabs living in those areas.

But what it comes down to, as always, is the response from the Palestinian Authority in the West Bank. So far, the PA leader Mahmoud Abbas hasn’t weighed in on the plan, but it is doubtful he will agree. Past leaders have even used the peace process to launch new attacks against Israel.

Even if he does agree, the task of disarming and removing Hamas from Gaza, as well as disarming Islamic Jihad and other terrorists groups, will not be easy.

Thankfully, no matter the outcome of this peace plan, we know that Israel will continue to thrive. It’s economy, culture, technological advancements and military are second to none in the region. Even more importantly, it will remain a safe haven for the Jewish people as anti-Semitism continues to grow around the world.

WE MUST NEVER FORGET THE HOLOCAUST

As I said at the beginning, Monday was International Holocaust Remembrance Day. It was a powerful moment at a forum in Jerusalem as world leaders from 49 countries stood together to speak out in one powerful voice against anti-Semitism and to remember the Holocaust. It fit perfectly with the official subject of the forum: “Remembering the Holocaust: Fighting Anti-Semitism.”

Unfortunately, younger generations aren’t being taught the horrors of this event. Many don’t know even know the name “Auschwitz.” They can’t recognize the very real dangers of growing anti-Semitism.

This is a heartbreaking problem that we at Jewish Voice – with your support – are doing something about. It’s part of our mission to educate and engage our world about Israel and the Jewish people.

It’s also part of our mission to reach out to Holocaust survivors. Israel is home to around 192,000 survivors, most over 85 years old and many over 100. Sadly, 48,000 of these survivors – who have already endured unimaginable suffering – live below the poverty line. Many need dental care and eyeglasses, but can’t afford them.

Jewish Voice, through your partnership, helps meet these important physical needs and shares the hope of Yeshua (Jesus). Together we are letting them know they matter. They are not forgotten. We remember.

LET US PRAY TOGETHER

I am thankful that I can come to you with specific prayer requests on behalf of Israel and the Jewish people because I know you will be faithful to lift them up before our Lord. The events of this week – from Holocaust Remembrance Day to President Trump unveiling his Middle East peace proposal — provide us with the opportunity to pray for:

Your prayer support is critical. Thank you. You can also stand with Israel and the Jewish people with a financial gift.

Your support today will be put to work to provide dental and eye care to Holocaust survivors in Israel.

Your generosity will also be used to rush humanitarian aid, clean water and medical care to the “Lost Tribes of Israel” scattered around the world.

Your gift will help engage the Church concerning Israel and the Jewish people. We want to be sure no one forgets the Holocaust. We also want to help educate people about what is happening in our world, specifically as it relates to Israel and God’s Chosen People.

And best of all, your support will help share the Good News of Yeshua (Jesus) with Jewish people in Israel and around the world.

THANK YOU FOR YOUR SUPPORT

For your gift of $20 or more, we’d like to bless you with our Lest We Forget package.

Six million Jewish people died in the Holocaust. Each one of them, and each survivor, is a unique story. During the Holocaust, the worst of the human race had free expression. The possibility that mankind is capable of such ideology and brutality is sobering. That’s why we can never forget the Holocaust.

Lest We Forget offers stories of Holocaust survivors and a brief history of how Adolf Hitler advanced his campaign to eradicate what he called “the Jewish problem.” We remember – and with our deepest respect, we honor – those who died, as well as those who survived the Holocaust. We remember . . . to ensure it never happens again.

In addition, you’ll receive a Holocaust Remembrance Lapel Pin. The motif of budding life from barbed wire honors the Jewish spirit that has transformed history’s greatest tragedy, the Holocaust, into one of history’s greatest miracles, the rebirth of the nation of Israel in the Promised Land.

Again, thank you for being a faithful supporter of Jewish Voice and for your love for the Jewish people in Israel and around the world

Will you join us in interceding for the Enewari Outreach?
Who is Jewish Voice Ministries?
Praises and prayer requests from the Poland festival
Is Trump’s peace plan good for Israel?
No child should ever have to make this choice