Our Mission and Vision

Our mission is to:

God has put on our hearts the vision to take the Good News to the “Lost Tribes of Israel” around the world who have not yet been reached with the hope of our Messiah, Jesus. Our goal is to accomplish this in the next 10 years. 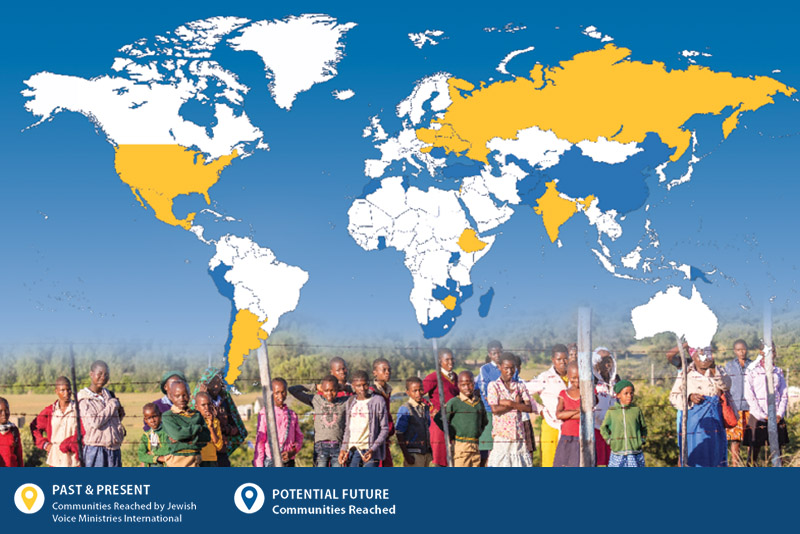 Jewish people need Jesus, the Messiah, just like everyone else. As God’s Chosen People, Scripture puts the highest priority on sharing the Gospel with them. Romans 1:16 says, “For I am not ashamed of the Gospel, because it is the power of God that brings salvation to everyone who believes: first to the Jew, then to the Gentile.”

Millions of Jewish people around the world have yet to hear the Good News.

Who Are the “Lost Tribes of Israel?”

The 12 sons of Israel became the 12 tribes of Israel. God freed them from slavery in Egypt and brought them into the promised land – Israel. Centuries later, the Israelites divided their kingdom into Israel in the north with 10 tribes and Judah in the south with two tribes. When Israel was conquered by Assyria in 722 BC, many of the 10 Northern tribes emigrated to Judah, some members fled or were taken captive or deported to other lands. They became known as the “Lost Tribes of Israel.”

How You Can Help

Your support today will help us seek out these “Lost Tribes of Israel” – from places like India, central Asia, the remote Pacific Islands and beyond. Then we will identify their physical needs – from clean water to medical care and more – and help meet these needs in the name of Jesus. That opens the door to share with these Jewish people about the life-changing hope of their Messiah.

Louis Kaplan’s commitment to use his voice to declare the mighty acts of God to his generation and to the next is the foundation for the work of Jewish Voice Ministries International (JVMI). Kaplan, a Jewish follower of Yeshua, launched Jewish Voice Broadcasts in 1967, a weekly 15-minute radio program It was an outgrowth of his decades of work as a traveling evangelist,. The radio program and the program first aired on Christian radio in Phoenix, Arizona.

1967 was a watershed year in Jewish history. Israel reclaimed the city of Jerusalem in the Six-Day War on June 7th, 1967. This miraculous act was a fulfillment of a prophecy in Luke 21:24 that directly connects the reestablishment of Jerusalem with the times of the Gentiles being fulfilled.

Louis Kaplan believed he’d followed his Savior to the crossroads of prophetic history. He’d committed his life to Yeshua at age 19 at the height of the Great Depression after attending a revival meeting at a nearby church. He said, “After the service, I hesitantly approached the minister and asked him privately if a Jew could be saved.

“He replied: ‘Salvation is of the Jews, and Peter and Paul and the prophets were all Jews.’

“I was astonished at that time to know that Christianity sprang from Judaism and that the first Christians were Jews!” After he committed his life to his Jewish Messiah, Kaplan returned to the home of his parents in New York City in order to tell them about his decision. After a bitter argument, his family asked him to leave the home never to return.

God provided for Louis’ needs as an older believer opened her home to him, and spent time daily discipling him (Deuteronomy 6:4-9). Kaplan began preaching in churches and revival meetings. After a return to the workforce managing a real estate office during World War II, he was convicted that he was missing the calling God had placed in his heart: to give his life over to the proclamation of the Good News to his generation and to the next. The Holocaust and the world events following, including the founding of the State of Israel in 1948, convinced Kaplan that our world was moving toward the End of Days prophesied in the Bible.

Kaplan said, “The greatest sign, warning, proof, and evidence to the world and to the Church of the end of this age is the restoration and resurrection of the House of Israel after being entombed in the graves of exile for many centuries.” After traveling around the country for years proclaiming God’s salvation to the Jew first, and also the Gentile (Romans 1:16), Kaplan received a call from God to begin a radio program. In January 1967, just months before the outbreak of the Six-Day War, Jewish Voice Broadcasts began airing a simple message: Yeshua heals, saves, and sets His beloved children free!

The ministry grew and flourished, touching countless lives and introducing many to Yeshua the Messiah. The baton of leadership was passed to Jonathan Bernis in 1998 when Kaplan suffered a debilitating stroke. Bernis founded Hear O’ Israel Ministries, an outreach organization that produced large-scale, international Festivals of Jewish Music and Dance throughout Eastern Europe and Russia. In 1999, Louis Kaplan passed away.

Bernis quickly realized Kaplan’s shoes were impossible to fill. Kaplan was beloved by the staff and volunteers, and in the early days, Bernis struggled to figure out how to lead the ministry forward. He visited Kaplan’s widow, Chira, and told her dejectedly, “I can’t do this anymore. I’ll never be able to fill Brother Kaplan’s shoes.” At those words, Chira got up from the table saying, “I have something for you.” She returned with three shoeboxes containing her deceased husband’s shoes.

Bernis said, “Now it so happens I have a very unusual shoe size – an 8-1/2 EEE. Guess what size they were? That’s right, 8-1/2 EEE.” It was a transforming moment in Bernis’ life. “Under my own power, and my own strength, I was inadequate. But through the Lord’s power, because of His calling on my life, I could fill Brother Kaplan’s shoes.”

Our message hasn’t changed. We are called to be a voice to the Jewish people. We exist in order to transform lives and see all Israel saved. Our mission—“To proclaim the Gospel to the Jew first around the world, engage the Church concerning Israel and the Jewish people, and build the Messianic Jewish Community”—has been unwavering. The strategy, the methodology, the technology, and the geographic locations of our outreaches have changed over the decades as Jewish Voice has grown and adapted with the times, but our mission will never change. We will remain diligent to this calling and mandate until the Lord returns.

JVMI produces a daily television show, Jewish Voice with Jonathan Bernis, to educate viewers in the U.S. and abroad on the Jewish roots of the Christian faith, Bible prophecy, and world events relating to Israel and the Middle East. JVMI also educates and shares our message through social media, seminars, webcasts, and print publications, including Jewish Voice Today magazine.

Our broadcast ministries exist in order to inspire our viewers to become a part of our mission to bring clean water, humanitarian aid, and the Good News of Yeshua to Jewish people scattered around the globe. JVMI provides practical compassionate assistance through recurring medical and dental clinics to impoverished Jewish people around the world, including Ethiopia, Zimbabwe, India, and Israel. The ministry also performs large-scale international festivals of Jewish music and dance in Eastern Europe and South America. These heritage events provide a unique opportunity to share our faith with attendees.

Should the Lord tarry, we will continue to build on the past in order to raise our voices to proclaim to this generation and the next that Yeshua is Lord. Won’t you partner with us in this life-saving, life-changing work?

Take a look at highlights from five decades of ministry