Doing Something About Dirty Water 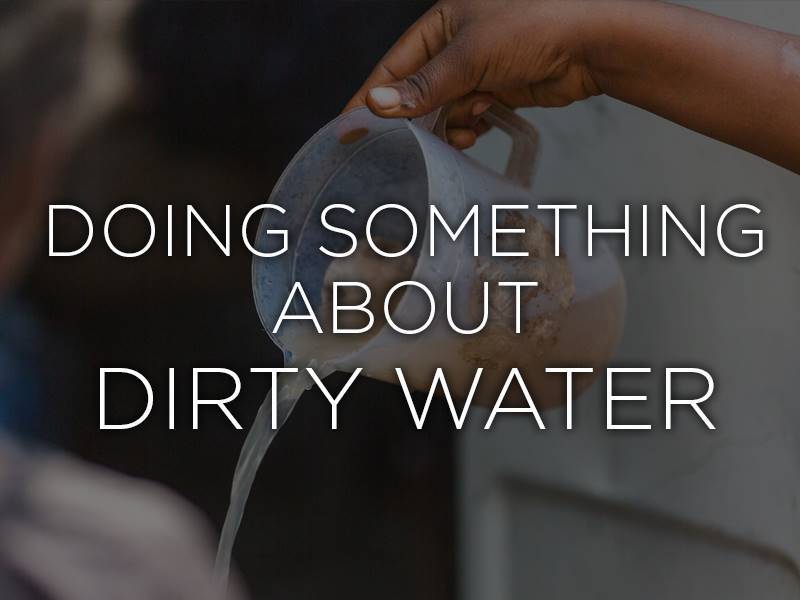 That 2.5 percent seems shockingly small. It gets even tinier when you eliminate the frozen water of glaciers and the polar ice caps. In the end, the best estimates conclude that less than 1 percent of the Earth’s water is drinkable (World Atlas).

Even this fraction is an overstatement when you consider that the water sources available to many people in developing nations are often contaminated. Today, 1 in 3 people around the world lack safe drinking water. In addition, each day, some 207 million people spend more than 30 minutes round trip to collect water from an improved source (WHO/UNICEF 2019).

But many people don’t have access to an improved source of water – some 780 million of them, according to the World Health Organization (WHO). These people are forced to drink water from streams and ponds which animals walk in, drink from, and otherwise contaminate. It’s also where people wash their clothes and bathe themselves. The murky water is often infested with bacteria that cause chronic and sometimes severe, even fatal, illness.

About 485,000 people die each year from diseases that are directly related to unsafe drinking water, inadequate sanitation and poor hygiene (WHO). Some 297,000 of them are children under the age of five. That’s more than 800 children dying each day from what are some of the most preventable diseases (WHO)  (WHO 2019).

They need safe drinking water. They need to know the importance of washing their hands.

When Jewish Voice Ministries International (JVMI) takes humanitarian medical aid to struggling and impoverished Jewish communities in Africa, we also take lifesaving water filters to improve the health of individuals. Along with this, we conduct hygiene classes that teach about the spread of disease through germs.

Here, many people learn for the first time the importance of clean water and washing of hands and face. At the end of one class, a woman stood up and said, “Thank you! Thank you! We have never heard any of this before!” When we return to an area with another Clinic, we often hear patients tell us they feel much better because of the water filters we provided the previous year.

JVMI Medical Outreaches are most often held in remote, rural settings of nations like Ethiopia and Zimbabwe, which have many outlying communities. In addition to the classes at our week-long Clinic sites, we often visit nearby villages to distribute LifeStraw® filters that remove 99.9% of harmful bacteria and parasites.

We can’t live without water. And if it comes down to a choice of drinking contaminated water or none at all, well, it’s really not a choice. And unfortunately, sickness and too many times, death follow. Clean water makes a world of difference. Will you join Jewish Voice in providing clean water to hurting Jewish communities around the world?