Why Messianic Judaism is Good for the Body of Messiah

Since Yeshua’s (Jesus’) first disciples, there have always been Jewish Believers in Him. Even so, what today is called the Messianic Movement is relatively new. Its beginning is intertwined with the Jesus Movement of the 1960s. Messianic Judaism comprises Believers in Jesus, worship observances and lifestyles that are identifiably Jewish. It has much to offer the Body of Messiah and is having a valuable impact within the Church in several ways.

Mark grew up in a kosher home. He came across a back issue of Jewish Voice Today magazine and read personal stories of Jewish people who came to faith in Yeshua. The testimonies intrigued him, and he wanted to know more.

When he learned of a Messianic Jewish congregation located three hours away from him, he made the trek one Sabbath. Afterward, he talked with the rabbi and placed his faith in Yeshua as the Messiah.

Back at home, Mark visited churches, but nothing fit for him. He missed the observances of his Jewish identity and longed for a place to worship with other Jewish Believers. When he discovered a Messianic fellowship in his own city, Mark found his congregational home and has been attending ever since.

The same kind of story occurs regularly all over the world. When the Lemba Jewish community in Zimbabwe first met representatives of Jewish Voice Ministries International (JVMI), they were thrilled to discover a Jewish expression of faith in Yeshua.

The Lemba have clear ties to the ancient people of Israel, particularly the Levites. They have maintained their Jewish identity through the centuries, even after many came to faith in Yeshua. But they weren’t comfortable in either traditional Christian or non-Yeshua-professing Jewish synagogues. When Lemba Believers learned of Messianic Judaism, they said, “Ah, this is the community where we can fully belong!” As Jewish Believers in Yeshua, no other form of worship met all of their needs.

“I had no idea how much Jesus is evident in the Jewish feast of Passover,” one woman said. “Before I attended a Passover Seder at my church, I never thought Jewish observances were relevant to my faith as a Christian.” This Gentile had been a Believer for more than 30 years but didn’t realize how little she knew about her faith’s connection with Judaism.

Messianic Judaism’s presence in the Body of Messiah brings to light the Jewishness of faith in Yeshua. It draws attention to the Jewish context of the Bible. This is an essential element to fully understanding the teachings of the New Covenant and recognizing God’s redemptive thread running consistently through the Old Covenant and pointing clearly to Jesus.

Gentiles have much to gain from Messianic Judaism as it enriches their relationships with God through an understanding of the Jewish roots of their faith.

In the years before Jewish Voice president and CEO Jonathan Bernis placed his faith in Yeshua, several people shared the Gospel with him. What stands out to him now about those instances is that each time he explained to the well-meaning Believers that he is Jewish, they apologized – as if the Gospel is not for Jewish people.

An unfortunate number of Gentile Christians are under the impression that Jewish people have another way of receiving God’s redemption. However, in John 14:6, Yeshua said that no one comes to the Father except through Him. Acts 4:12 further states that there is salvation in no one else and by no other name than Yeshua. When Jonathan came to believe in Yeshua, he was surprised to learn that not only was Yeshua for Jewish people, but the Gospel was for them first (Romans 1:16).

Messianic Judaism brings focus to the fact that Jewish people need Yeshua and inspires Gentile Believers to pray for and reach out to them.

A woman approached JVMI staff member Rabbi Jack Zimmerman shortly before his speaking session at a conference in New York. She was convinced that he was “a Jewish-Christian rabbi trying to bring her back under the Law.” As Rabbi Jack spoke with her, it became clear that she also wasn’t sure that God continues to have a distinct plan and purpose for Israel and the Jewish people.

After Jack’s teaching, her entire perspective had changed. She came to understand that God is not finished with Israel and that Christians have a responsibility to support Israel and pray for the Jewish people.

A dangerous misconception exists in parts of the Church today, in which some believe that God has rejected Israel and replaced her with the Church. The book of Romans emphatically teaches otherwise. Not only is the Gospel for the Jewish people first, but the apostle Paul also notes that:

Messianic Judaism underscores for Gentile Believers the everlasting nature of God’s covenant with Israel (Genesis 17:17). It inspires within the Church a love for Jewish people and Israel.

Messianic Judaism is good for the Body of Messiah. Not only does it provide a fitting worship experience for Jewish Believers, but its presence enhances the walk of Gentile Believers by providing vital and rich biblical context for faith in Jesus. It also helps maintain the integrity of Scripture regarding the Jewish need of Yeshua, God’s faithfulness to Israel and the Church’s responsibility in these regards. As Messianic Judaism grows, so will its positive influence in the Body of Messiah. 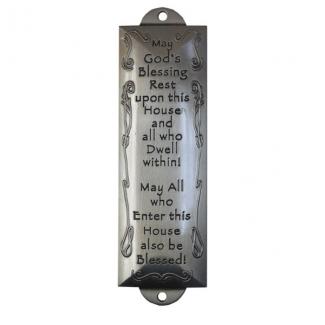 Get the House Blessing Mezuzah

This pewter mezuzah is engraved on both sides with gracious blessings for your home. Delicate ribbon-like designs highlight the words, “May God’s blessing rest upon this house and all who dwell within! May all who enter this house also be blessed!” Inside, the words of Deuteronomy 6:4-9 are printed in Hebrew on a parchment scroll. Measures 5” high.